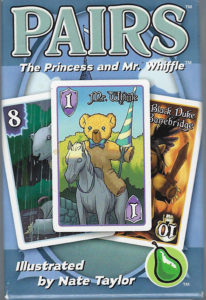 Pairs is a “new classic pub game” created by game designers James Ernest and Paul Peterson. There are a dozen different decks, and most decks has its own game variant. The game came into being through a Kickstarter in 2014. This deck is The Princess and Mr. Whiffle variation, and was printed after a stretch goal was met. This limited edition version is based on a book by Patrick Rothfuss and Nate Taylor. It is illustrated in the style of a children’s book, but it’s certainly not for children. This deck was from the first print off of Kickstarter because it contains a sturdy, plastic cut card that is not found in commercial copies. The cards are standard bridge sized and contains 55 cards and a rules booklet which includes the a game variant for the deck called Kitty. You can see all of the different decks and read the rules at Hip Pocket Games.  END_OF_DOCUMENT_TOKEN_TO_BE_REPLACED

This is a 43 card match pairs card game. There are 21 matching pairs of cards and one “Old Hag” card. Deck includes instruction card. The side of the box declares “Let’s Scare Up Some Spooky Fun!” The game is created by Bethany Lowe Designs. 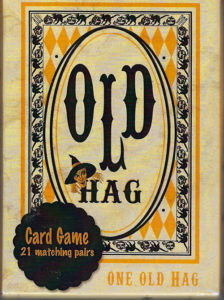 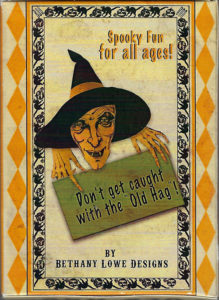