These Monty Python playing cards are one deck from a two deck gift set. The original set comes with two decks of cards and poker chips. Each card has a different image from Monty Python’s many television and movie productions. This deck is unopened, in shrink wrap. I only have one of two decks, and I do not have the original box they came in. 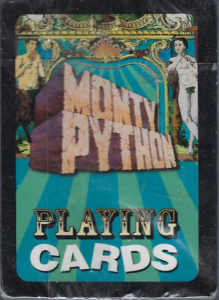 Front of deck and card back style 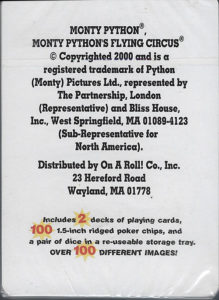 Back of deck showing info card 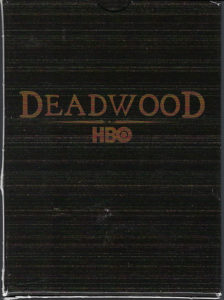 This is a deck of playing cards featuring characters from the HBO original show, Deadwood. This is a 52 card deck, with two joker cards. The jokers, jack, queen, king, and ace cards all feature characters from the show. Number cards are standard, but feature only one large pip of the suit in the center, instead of the corresponding number. The deck also contains two cards stating “For promotional use only. Not for resale,” with the HBO logo. The deck is unsealed, and the tuck box has wear damage, but the cards unused, still in numerical order. END_OF_DOCUMENT_TOKEN_TO_BE_REPLACED